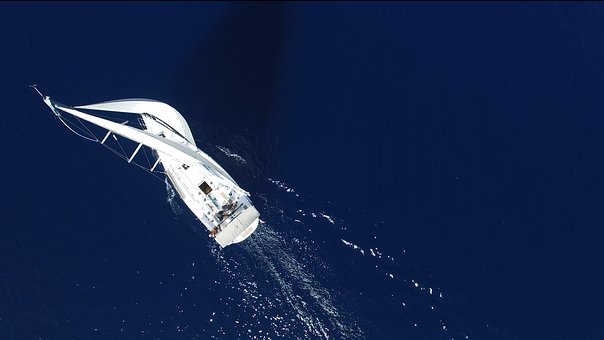 World’s new largest private yacht that is bigger than a cruise ship and cost £800m is built for one very rich owner.

The world’s largest yacht, measuring 222m, is due to be completed by 2018. It will eclipse the President of UAE’s boat Azzam by a whopping 40 metres. Record breaking yacht will boast seven decks, two pools and cost £788m. The massive boat is the latest salvo in megarich’s game of one-upmanship. Owners hope the boat will be extremely difficult, if not impossible, to beat.

Boasting seven decks, two pools, multiple hot tubs and a 275 square metre master suite, a new record-breaking superyacht is set to redefine the limits of luxury boat building. Costing £788million to build and measuring 222 metres in length, when completed Triple Deuce will be the most expensive and largest superyacht ever constructed. The luxury boat will surpass the remarkable standards set by Chelsea FC owner Roman Abramovich’s 163m Eclipse, and the current record-holding 182 metres-long yacht owned by the President of the United Arab Emirates.

Expected to require between $20 and $30million a year in operating costs alone, the build costs more than the annual GDP of Western Sahara, the British Virgin Islands and Micronesia, CNN reported.

Although the identity of its owner remains a mystery, it is due to be completed in 2018 and is being purposely made 40m larger than the current record-holder in order to be difficult to beaten in size.

Reports suggest that despite its size, the luxury private yacht will only carry 36 guests with a crew of around 50 – 70 people.
The owner’s suite will cover two stories across 275 metres-squared and offer unparalleled views, along with a private gym, office and dining room, according to Asian Pacific Boating.

It will also have two staterooms, an exclusive elevator drive in dock and private access to a helipad. Guests will be entitled to use the yacht’s outdoor and indoor pool, numerous hot tubs, spa facilities as well as a full time masseuse and hairdresser.

Triple Deuce’s top speed will be over 30 knots (35mph) and will be powered by triple gas turbine engines with over 100,000 horsepower.
The vessel also has no rudders and will instead use electric podded propulsion units to manoeuvre. 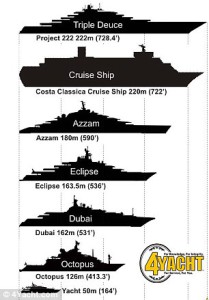 Craig Timm of 4Yacht, the broker of the building project, said its owner was motivated by boasting rights and construction, at an as yet undecided European shipyard, is expected to begin within the next 12 months.
He also said that the building work will take two to three million hours to build and bring in employment opportunities for 500 people for a period of three years.
‘It’s just like the competition to build the world’s tallest building.
‘Our client was concerned that if we built the yacht to 220m, then someone would come along like Roman Abramovich when he built Eclipse at 163.5m, and outdid Sheikh Maktoum’s yacht, the 162m Dubai, by only 1.5m.
‘By building the yacht to 222m, the owner wants to make it difficult, if not impossible, to be “eclipsed” himself.’
Abramovich’s yacht was completed in December 2010 and is the world’s third largest superyacht.
It requires 70 crew members to operate and features two helicopter pads, three launch boats and a mini-submarine.
When built, it took the title of world’s biggest private yacht from the Dubai.
This had taken the crown from the 138m Rising Sun, owned at the time by American businessman Larry Ellison, which in turn took over from the 126m Octopus, owned by Microsoft co-founder Paul Allen.

However, Abramovich’s reign as the owner of the world’s largest superyacht was short lived – in 2013, the Emirati royal family knocked it off its perch with Azzam, which exceeded it in length by 16.5m. At the time it was predicted – quite accurately – that this would trigger a new round of one-upmanship among the world’s super rich. Longer than 12 double-decker buses, not only is Azzam the biggest superyacht, it is also one of the fastest. The 94,000 horsepower vessel can reach speeds of more than 30 knots, or 35mph.
To view the video, go to The Daily Mail